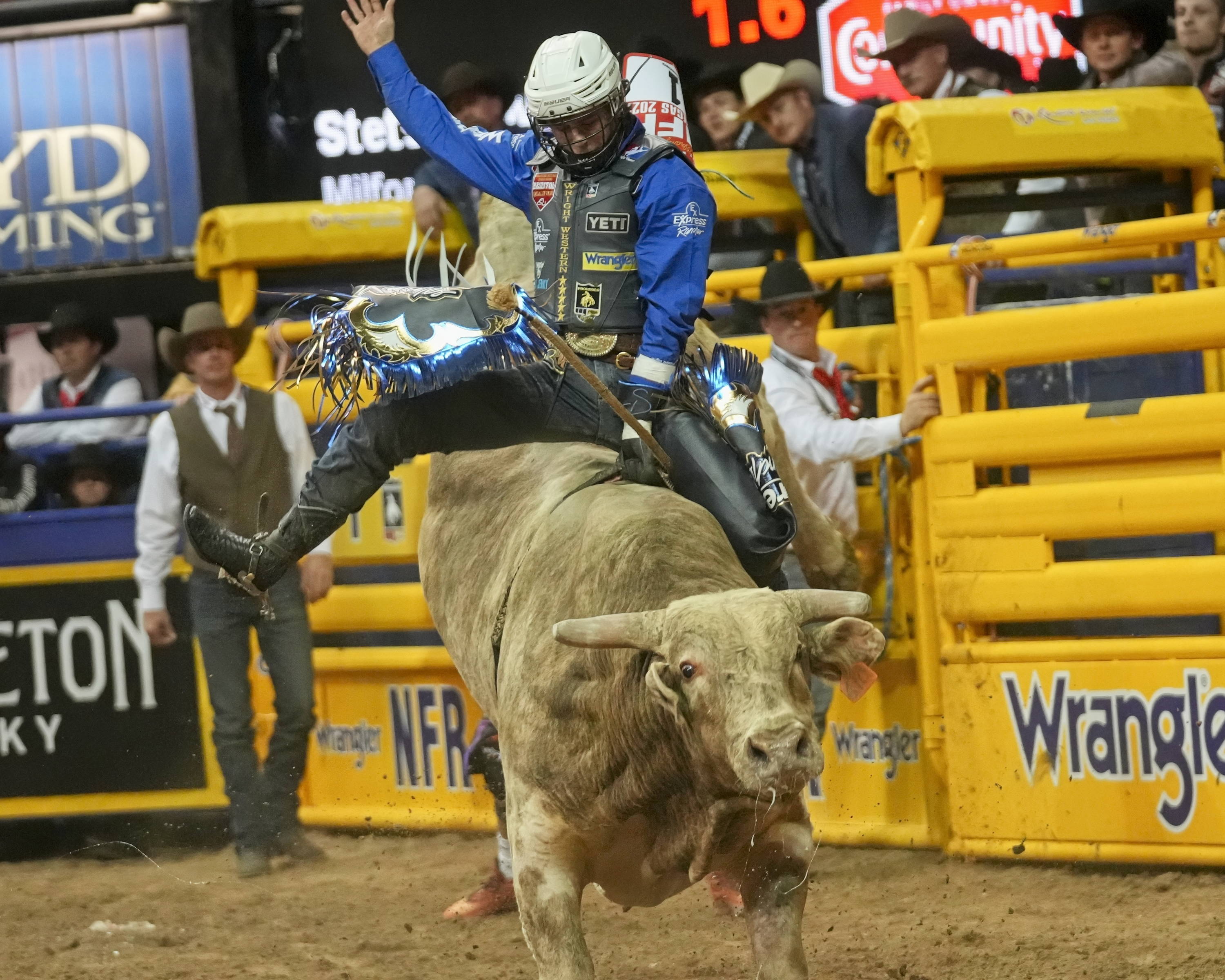 LAS VEGAS – He stood there holding two priceless pieces of gold, an undeniable talent and a bit of disappointment that he didn’t have a third.

Resistol cowboy Stetson Wright is just four years into his ProRodeo career, and he’s already a seven-time world champion. He had hoped to make it eight in 2022. He dominated his bid to repeat as the all-around titlist, earning his fourth straight. He was just as dominant in earning is second bull riding title in three years.

But he just missed out on earning his second straight Montana Silversmiths gold buckle in bronc riding, and that’s what left him wanting more. He had hoped to become the first Triple Crown winner since Trevor Brazile did it in 2011.

“It rates up there with all of them,” he said of his 2022 championships. “When you keep repeating things you’ve done before and proving that it’s not a fluke, it’s a pretty good feeling. I’m a little disappointed in my performance in the bronc riding this week. I feel like I could have done better and won some more, but this is exactly what I need.

“I would say bronc riding humbled me this week, and I will be back next year, and I will walk out of the Thomas & Mack with three gold buckles. That’s going to be my thing. I’m sitting here dealing with this humility. I had as good a chance as anybody coming in, and I let it slip. From here forward, I’ll make sure there’s something I won’t (leave behind) here.”

Champion words from the foremost champion going in ProRodeo. In his inaugural campaign, he earned a trifecta that still stands out today when he was named the Resistol Rookie of the Year in the all-around, saddle bronc riding and bull riding. He earned his first National Finals Rodeo qualification in bull riding and secured his first all-around world championship in 2019.

He’s followed with three more, added his first bull riding crown in 2020 and his first bronc riding title in 2021. One, though, sticks out just a bit more. The all-around gold buckle is the only one issued to world champions that actually has the word “cowboy” on it, and that means something to Wright.

He’s making quite a statement to back that up. The winningest cowboy in ProRodeo history is Brazile, a talented Texas roper who won 26 gold buckles in tie-down roping, heading and steer roping. He’s also one of just two cowboys in the PRCA’s history to have qualified for the National Finals in all four roping disciplines.

It’s going to take some time to consider Wright’s place in history. He’s still 19 titles behind Brazile and two behind legend Ty Murray, the last roughstock cowboy before Wright to have won the all-around championship, which he did in 1998.

“I grew up in a family of world champions, and it seemed like every time I tried to compare myself to them, I would take two steps backward. You can’t be somebody else. You should never compare yourself to someone else. You’ll never be your best, so I compare myself to 2022 Stetson Wright, and now I’ll try to be better in 2023.”

Why the disparity in his all-around money and total earnings? There was money he earned at Xtreme Broncs and Xtreme Bulls events that count toward individual event world standings but doesn’t count toward the all-around race.

“This year has been the best and the hardest year I have had in the PRCA,” he said, noting there were occasions where he missed events because of injuries. “When you are missing stuff like that, you don’t feel like you are doing your bet. I had to learn a lot of patience. I had to trust everything my mom and dad said when I needed to sit out.

“I learned that if you wait and get healthy, you will do a lot better.” 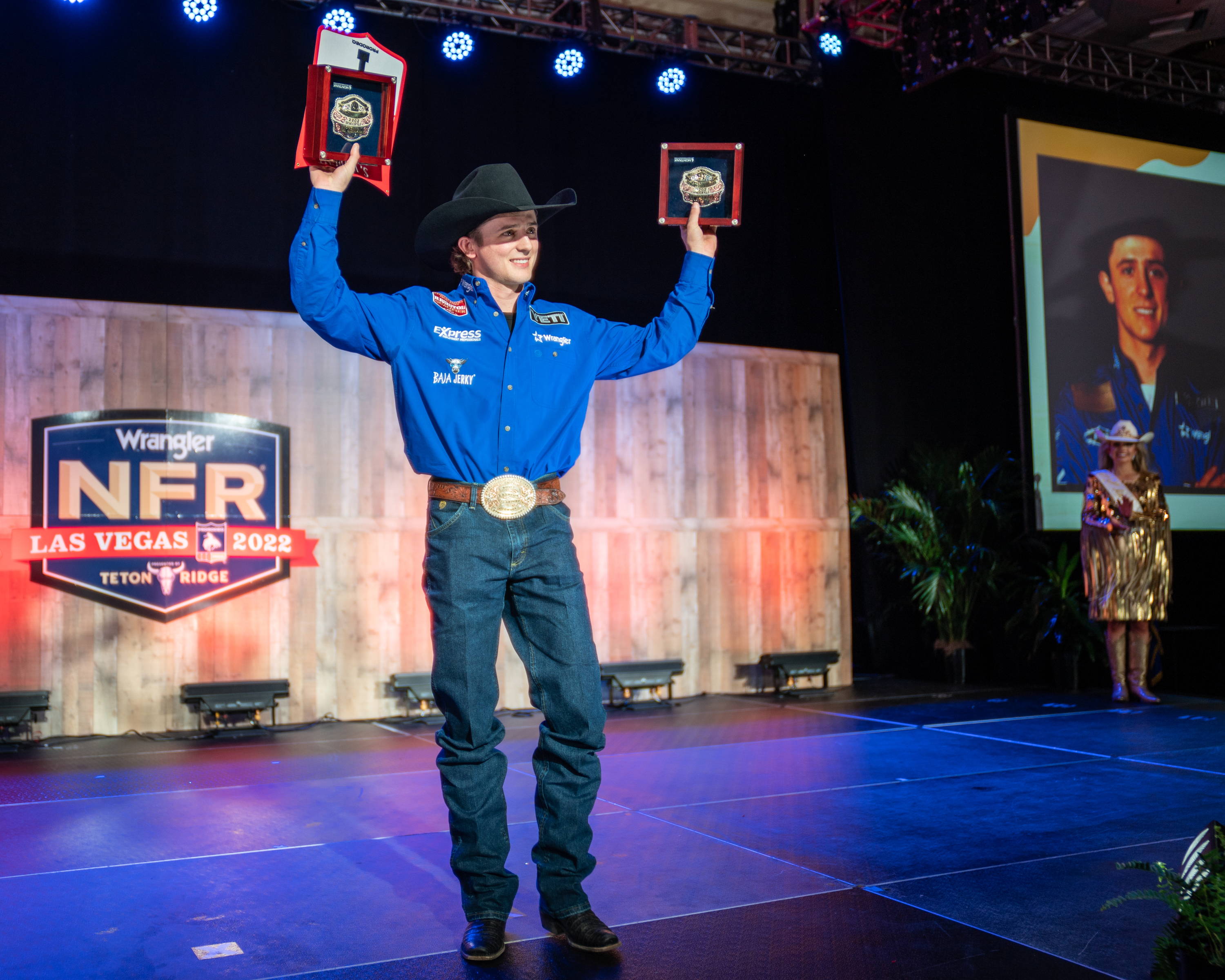 “These gold buckles (are) what wake me up every day and keep me going,” Stetson Wright said. “It’s like a drug. I can see why people have a hard time with this stuff. That third buckle was right there, and it almost felt like it was on my waist, and it got snatched away. Everything is on me, but I will be back better next year, and there will be no questions.”

Like the men who forged their way to the West Coast 200 years ago, Wright has a bit of a gold rush going. He craves the trophies and the value of his work to get them. Other than the one he wears, Wright keeps his buckles in his father’s gun safe.

“No one will ever see them unless I pull them out,” he said. “They really do mean so much to me that I hardly want anybody to even look at they. They are so hard to win. There are 15 bronc riders that had a legitimate chance to win a gold buckle. (It’s the) same in bull riding; (there are) exceptional bull riders, one of the best years of bull riders.

“That’s why they mean so much to me, because I’m competing against maybe the best guys the PRCA’s ever seen. To be able to walk out of here with two gold buckles is pretty special.”

Stetson Wright is pretty special. He’s humble, articulate and cares deeply about others around him. He’s focused and driven and the greatest champion in rodeo today.

He’s also just 23 years old, and if he keeps winning at the pace he’s on now, he will soon be recognized as the King of the Cowboys.