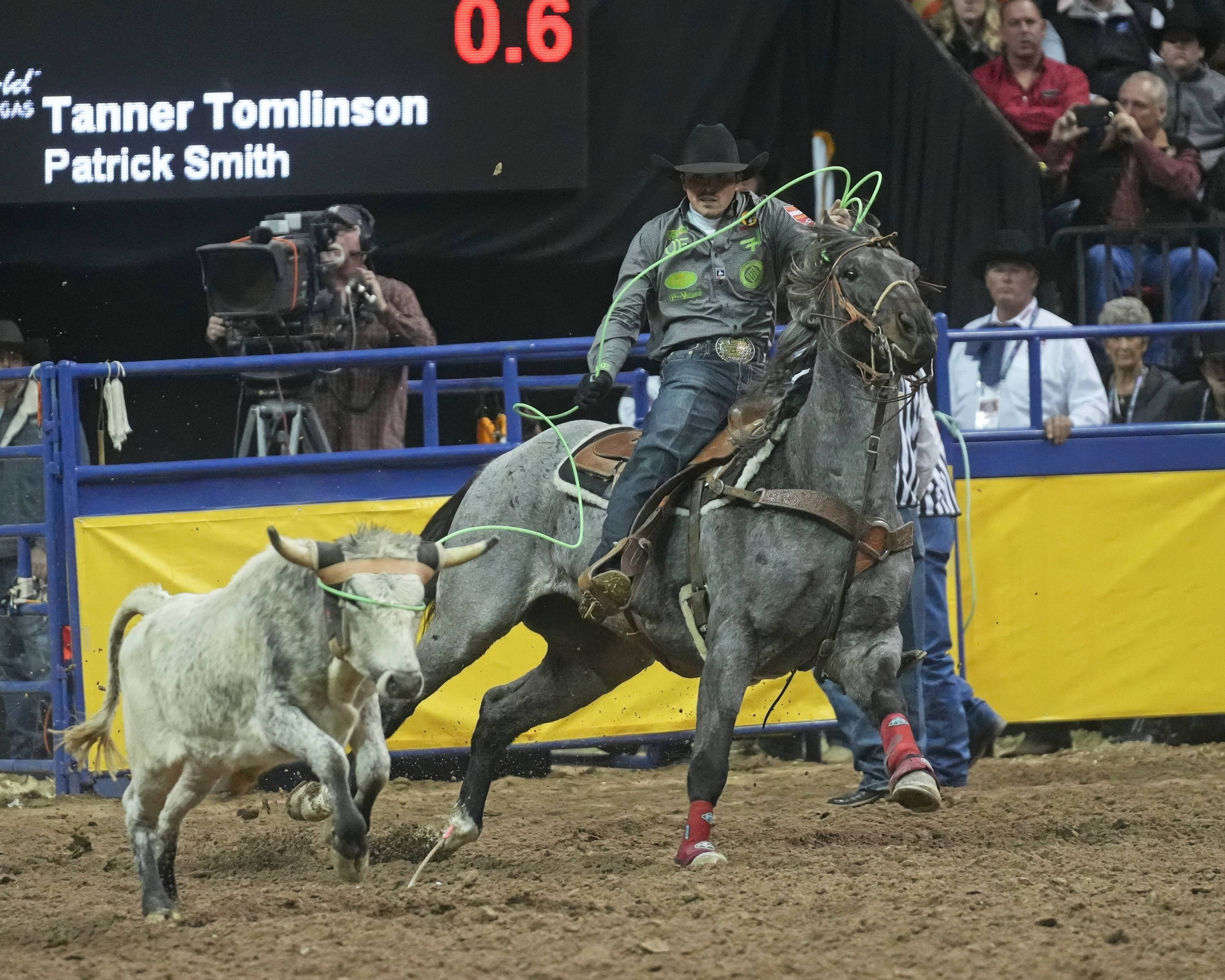 LAS VEGAS – By the time Tanner Tomlinson arrived in town for his first appearance at the National Finals Rodeo, he had a pretty good idea about the look and feel of the arena at the Thomas & Mack Center.

The experience of backing into the timed-event box to run steers inside the packed stadium can be daunting, and the arena is only as wide as a hockey rink. The dimensions put team ropers on alert, and those yellow gates and chutes just add to the intimidation level.

The Resistol header was ready, though, thanks in large part to his heeler, two-time world champion Patrick Smith. The two spent a great deal of time figuring out their run inside the confines of Smith’s arena in Lipan, Texas, which were set up to mirror the environment they were to face at the richest rodeo in the world.

“Me and Patrick … we worked our butts off all year,” said Tomlinson, the 2020 Heading Resistol Rookie of the Year from Angleton, Texas. “The last two months (prior to the NFR), we worked as hard as anyone. He set up his NFR arena at his house, and we roped 70 steers a day.

“We weren’t going to catch all 10 steers just to catch them. We were running them for times that could put us in the money and make the best runs we could on each steer. We tried to make 10 runs like we know how to do.”

It paid off. Tomlinson and Smith not only won the NFR average title, but they did so in record-setting fashion. They roped 10 steers in a cumulative time of 53.0 seconds to beat the mark set a year ago by Andrew Ward and Buddy Hawkins by nearly 2 seconds. They also placed in seven rounds, including at least a share of two round victories, and left Las Vegas with $199,727 each.

“It’s a feeling I’ll never forget,” said Tomlinson, 22, half the age of his partner. “It’s always been a dream. Every night I laid my head down, I was thinking about competing at the finals. After this, I will do what it takes to be there every year. It’s like no other feeling I’ve had. The atmosphere is incredible. It makes you want to come back.

“RodeoHouston is my hometown rodeo, and that was my first steer there this year. I thought that was big deal, but it’s nothing like riding through that tunnel and backing into the box at the Thomas & Mack.”

The youngster and the veteran teamed up for the start of the 2021 calendar year. They roped through that campaign, finishing among the top 35 in the final world standings. That opened the door for big opportunities this past season, and they seized them. They earned some nice victories, but more than anything, they just kept placing along the way and collecting the paychecks necessary to make the NFR for the first time together.

It was Smith’s 12th trip to Las Vegas for the championship. He earned his first Montana Silversmiths gold buckle in 2005 while roping with Clay Tryan, then added another five years later with Trevor Brazile. Tomlinson is still awaiting his first, and he’d love to earn it with Smith.

“We had jackpotted twice, but we started together my second year,” Tomlinson said. “I had one head horse when I started roping with him.”

He quickly realized he needed to invest in his herd, so he began finding the right mixes in equine partners. Together, he and Smith entrusted their runs to some special animals to lead the charge.

“We had good horses, and mid-year, we finally started getting a good run together,” he said. “It all started clicking, and we got on a little heater. We were really looking forward to us roping together at the finals. We weren’t going to let them have a finals without us.”

It’s a good thing. Each man finished the regular season with more than $300,000 in earnings, good enough for sixth in the world standings, then things blossomed in the Nevada desert. They were making their runs. They were the only team of the 15 that secured times in all 10 go-rounds, and that average title came with a paycheck of more than $74,000.

They put a stamp on that aggregate championship by stopping the clock in 3.7 seconds on the final night of the 2022 season, finishing in a three-way tie for first place in the round with Rhen Richard and Jeremy Buhler and the Resistol tandem of Tyler Wade and Trey Yates.

Tomlinson and Smith also set another standard with the fastest Round 3 run ever made at the NFR when the flag dropped in 3.6 seconds.

“I didn’t do anything out of the ordinary,” Tomlinson said that speedy run. “I new we had the steer in the herd. I didn’t feel like it was that fast, but that’s where people get caught up trying to go too fast. If you just make your run, it should be fast enough.

“Our season was incredible; I’ll never forget it. It will be hard to top off this NFR, my rookie year there. Be broke Buddy and Andrew’s record and finished it off with a go-round win. It was good to get Patrick back out there.”

It was Smith’s first NFR since 2015, and he proved that a young gun like Tomlinson can bring back the spark needed to excel in Las Vegas.

“Patrick has helped me tremendously,” Tomlinson said. “He does a great job of keeping my nerves down, teaching me the business way of it. He has helped me learning how to do this for a living. 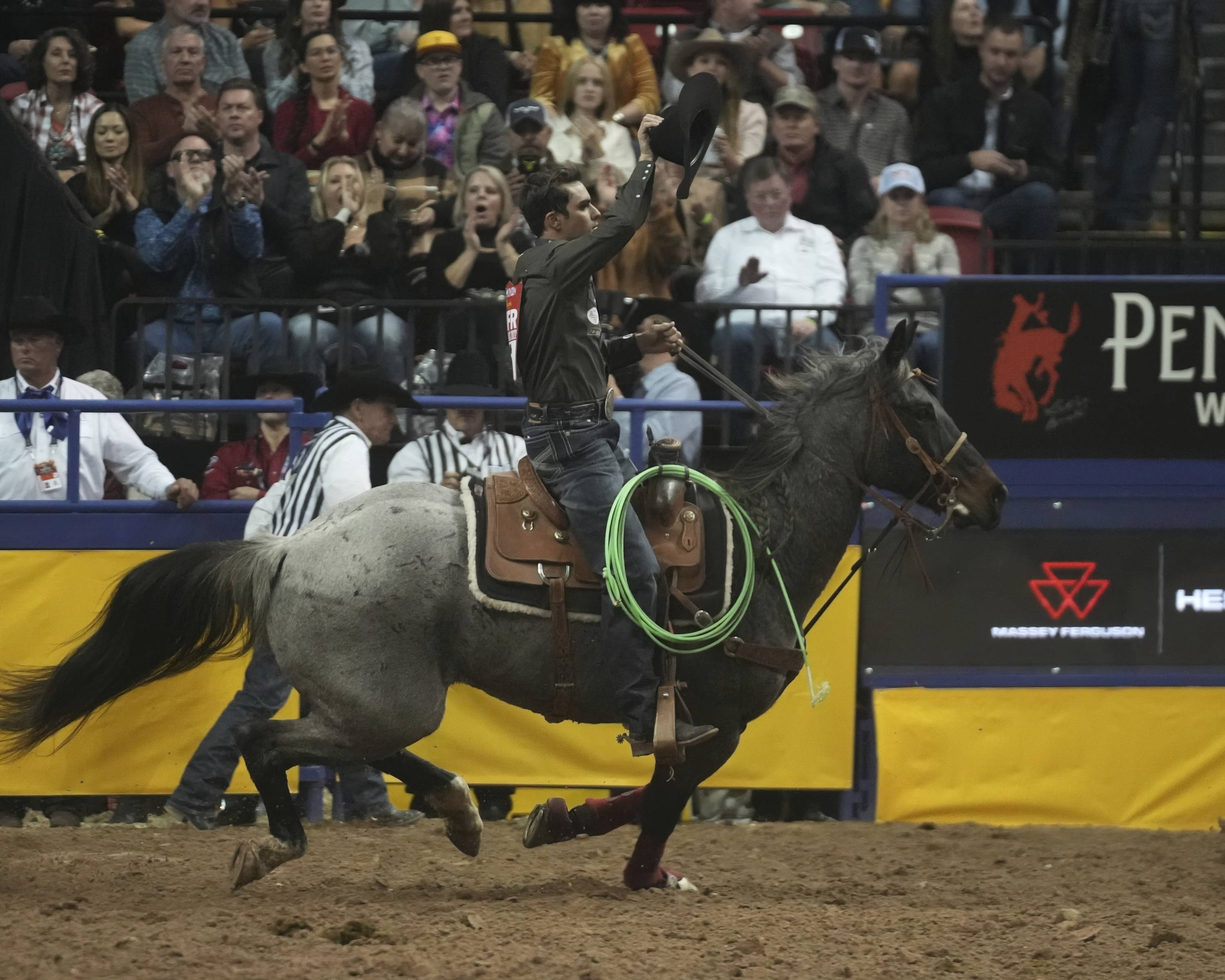 “When you rope in the Thomas & Mack, you will work 10 times harder to make sure you are there again.”

That’s the plan again for 2023. They’re both confident in the horsepower they have in the rig, and they like how their run works, whether it’s in a big pen like Cheyenne, Wyoming, or at the NFR. They were the team to beat in Las Vegas.

“We just talked like we normally do,” Tomlinson said. “Our partnership … he’s like family. Our friendship means more than anything. We got us a run together, came up with a game plan and went with it every night.”

Most of his season, the Texan rode Freightliner, a 15-year-old gray gelding that helped Tomlinson earn his first NFR bid. Once he decided on Las Vegas, he opted for 17-year-old blue roan gelding named Old Blue, which is owned by fellow header Coy Rahlmann of Ellsinore, Missouri.

“He called and offered him to me,” Tomlinson said of Rahlmann. “I was debating between his horse and a horse of Trevor Brazile’s. I had an old horse called Ivy that was super easy that got my career started. Blue was like her, and he faced like her and was just stronger and faced better. That horse made it super easy and fun for me all week.

“He took the thinking out of it. When you’re mounted good out there, you don’t want to have to think about the scoring or getting to the steer. All I had to worry about was me and my roping.”

What were the lessons gained in his first time playing on ProRodeo’s biggest stage?

“I’m going to build on my work ethic and try to get more head horses underneath me and get myself mounted right,” he said. “I want to get more and better head horses to make it easier to my heelers. I’m gong to work as hard as I can at it. I want to continue to get better.”

That’s what it takes to compete at this level, and even in his early 20s, Tanner Tomlinson has a keen understanding of what he wants his future to look like. He’s ready to make it happen.