Alabama Cowboy One of Seven Resistol Bulldoggers Going to Vegas

The last time Resistol bulldogger Kyle Irwin qualified for the National Finals Rodeo in 2019, he was still in his 20s and was riding the Steer Wrestling Horse of the Year, Scooter, an athletic sorrel speedster he co-owned with friend Tyler Pearson.

He and his wife, Randa, were the parents of two, Tripp and Ellie. Life was grand, and he loved making a living in rodeo.

Life is still grand, and he still loves rodeo, but things have changed considerably for Irwin, originally from Robertsdale, Alabama, but now living in Westville, Florida, with his family.

“We have another addition to our family with Ike,” said Irwin, 32. “I’m also a couple years older.”

He laughed a little, but that’s more about Irwin’s personality than anything. Scooter is now retired, but Irwin has found an alternative in Sissy, a 12-year-old bay mare; she wasn’t the only mount Irwin used this year.

In fact, he utilized several horses this season, one in which he earned $98,354; he is ninth in the world standings and will return to the NFR for the sixth time in his career. He plans to ride another Horse of the Year in Curtis Cassidy’s Tyson once they arrive in Las Vegas for the championship, set for Dec. 1-10 at the Thomas & Mack Center.

“I bounded around a little this year, but I didn’t mind it,” Irwin said. “There are a lot of great horses out there now, and guys were decent enough to let me on. Tyson is a great horse. I’ve always liked his feel.”

That bodes well for the cowboy who moved to Oklahoma to attend college on rodeo scholarships. He first attended Western Oklahoma State College in Altus, then transferred to Northwestern Oklahoma State University in Alva, which has since become known as the Bulldogging Capital of College Rodeo. 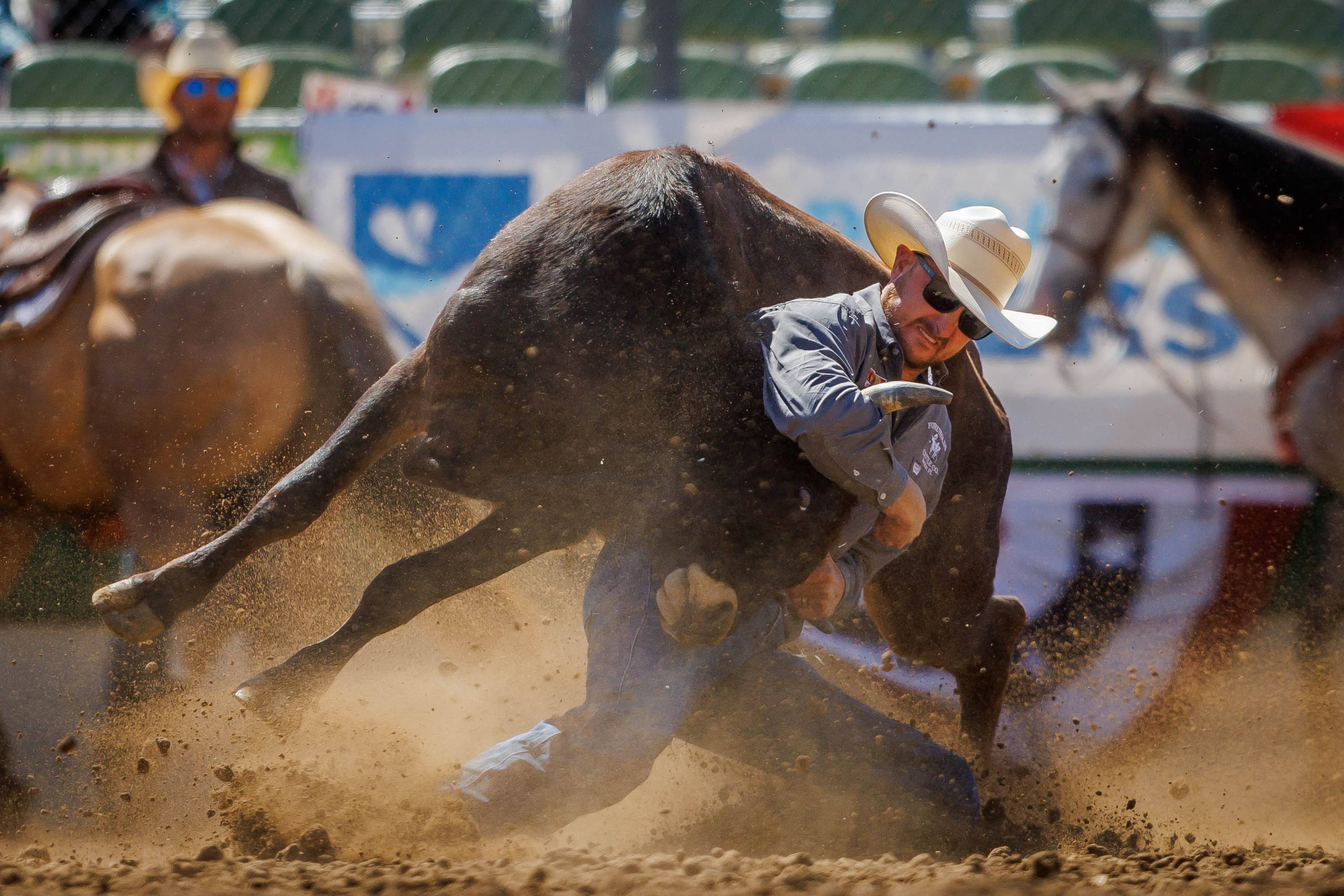 In 2011, he finished as the reserve national champion, placing second by just a 10th of a second. Since then, he’s found other ways to gather national titles, winning the national circuit finals rodeo twice: in 2014 when the RNCFR was in Guthrie, Oklahoma, and again this past July during the NFR Open in Colorado Springs, Colorado.

Both instances gave Irwin a big push toward his bids toward the NFR. It was that inaugural trip to Sin City that served him very well. He collected more than $88,000 that December and finished the season as the reserve world champion to Luke Branquinho.

“It goes back to the game plan we had at the beginning of the year,” he said, noting that he collaborated with a bulldogging cousin, Quinn Campbell, to figure out the best way to get back to Las Vegas in December. “ ‘Q Ball’, a few buddies from around here and I started working together. I bought steers this year and took them to some of the circuit rodeos, so it made me run a lot of cattle.

“I stayed sharp at the game. Heck, with watching the finals the last two years, I really craved it. I would say I was working toward a goal like never before.”

It paid off, and he’ll have a chance to showcase his work ethic inside the Thomas & Mack, the NFR’s home since 1985. He’ll pull his Resistol felt down tight and see what he can do when the bright lights shine.

“I think Resistol stands for the cowboy way,” Irwin said. “They’re through and through with the values and traditions of being a cowboy. By being part of the team and what that does for my family, you feel the support that you need.”

He will be joined at the NFR by six other Resistol bulldoggers.

Eight seasons ago, word around the steer wrestling ranks was that Tyler Waguespack was the next big thing coming.

He proved everybody right. The next year, he qualified for the National Finals Rodeo for the first time. In 2016, he earned the first of three Montana Silversmiths gold buckles. He’s since added world titles in 2018 and 2021. He’s been at the top of the game or near it for each of his eight NFRs.

This year, he will roll into Las Vegas second in the world standings with $123,873. He trails the leader, Idahoan Stetson Jorgensen, by less than $11,000. Waguespack can catch Jorgensen with a fourth-place go-round finish at the NFR, worth $12,125.

Waguespack is married to the former Sarah Rose McDonald, who qualified for the NFR in barrel racing a half dozen years ago. Together they make a real rodeo couple. Beyond that, Tyler Waguespack continues to prove why he’s a contender to continue winning rodeo’s gold. 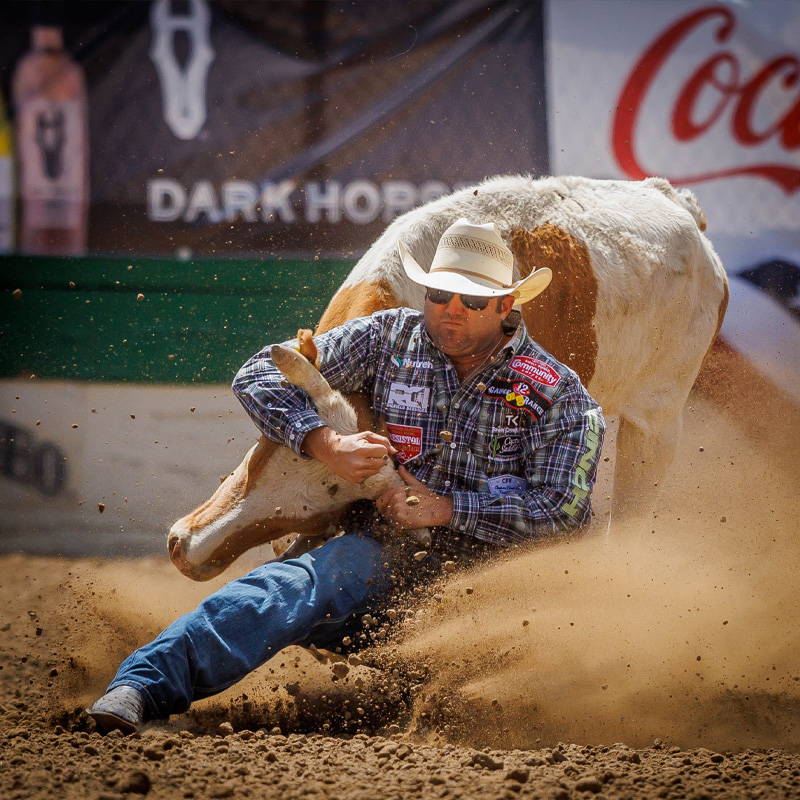 Will Lummus found plenty of things to build on at the 2021 National Finals Rodeo. He won his first average title, placed in six nights and won at least a share of two go-rounds.

He finished second in the world standings. This yeare is fourth on the money list this year with $119,781 earned over the course of the regular season. He’s within range of the top spot in the bulldogging world, but he needs things to go his way during the 10 December nights in Las Vegas.

The rodeo world is known for its familial feel, but Lummus grew up around it and knew he wanted to be part of it. His uncle, Bob Lummus, was a four-time NFR qualifier in steer wrestling, so the apple didn’t fall too far from the Mississippi family’s tree.

Beyond all his expectations and his drive to win titles, Will Lummus is also a mentor. Just this year, he signed up to be the rodeo coach at Northwest Mississippi Community College, not far from his home. He’s itching for all those lessons to add up to a world championship. 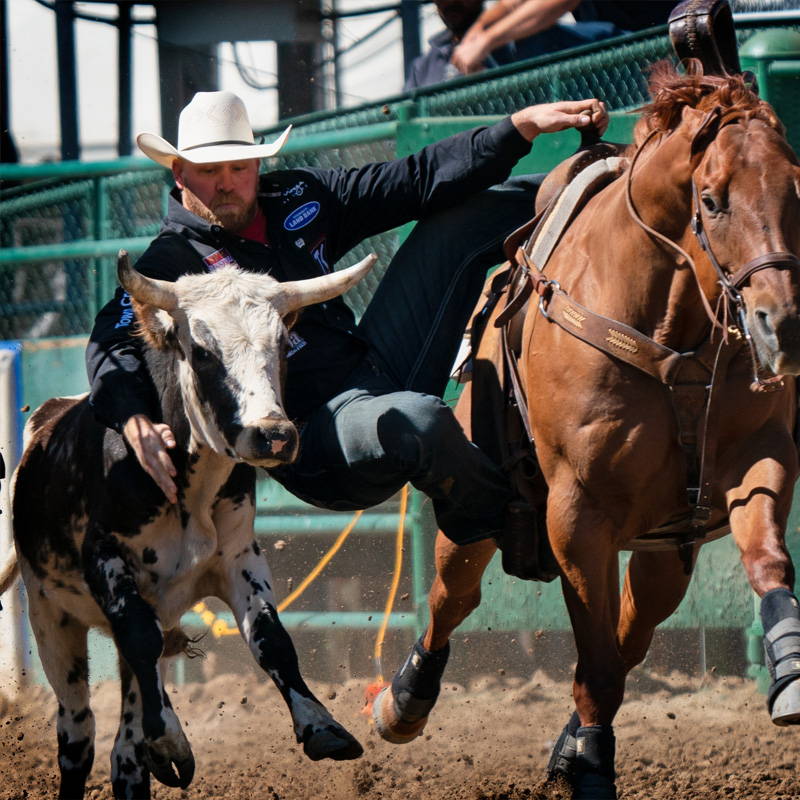 Ty Erickson has a brilliant memory. The last time he played on ProRodeo’s biggest stage inside the Thomas & Mack Center in 2019, placed just three times, including the ninth-round victory, and finished fifth in the average race.

The $88,410 he tallied in those 10 days was enough to push him over the top, and he claimed the Montana Silversmiths gold buckle for the first time. It was the culmination of a brilliant season, one that saw him earn nearly $235,000. He was the first Montana steer wrestler to win the world since Bill Linderman did so in 1950

He’s been close to making the NFR each of the past two years: He was 18th in 2020 and 17th last year, but only the top 15 play in Las Vegas. This year, he secured his qualification by collecting $107,784 and is ranked sixth in the world standings.

This season marks the seventh time in his established career that Erickson has made the NFR. He is one of ProRodeo’s elite bulldoggers, and he stands out among big men at 6-foot-5. It’s his talent, though, that makes him someone to watch in Sin City. 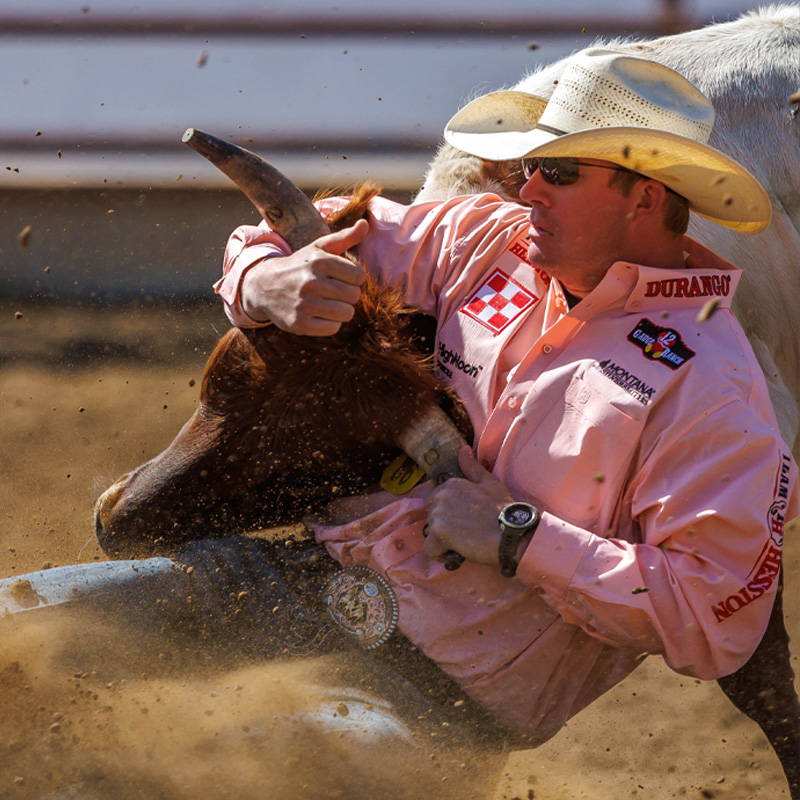 Most newcomers to the National Finals Rodeo look at the yellow chutes and quickly realize they’re in the middle of something special. It can be overwhelming for some.

That wasn’t the case for Tristan Martin last December. He was ready for the sport’s biggest stage. It wasn’t too big, and he proved it by winning nearly $108,000 over the 10-day championship. It pushed him to fifth in the final world standings.

That wasn’t the best part. As soon as the NFR concluded, he scrambled home as he and his wife, Josee, had their first child, a boy they named Boudreaux. With them in tow for the 2022 season, he started off hot and stayed that way, earning $104,553.

He is seventh in the world standings, but his victories throughout the season prove he’s ready to move up when his opportunity comes. 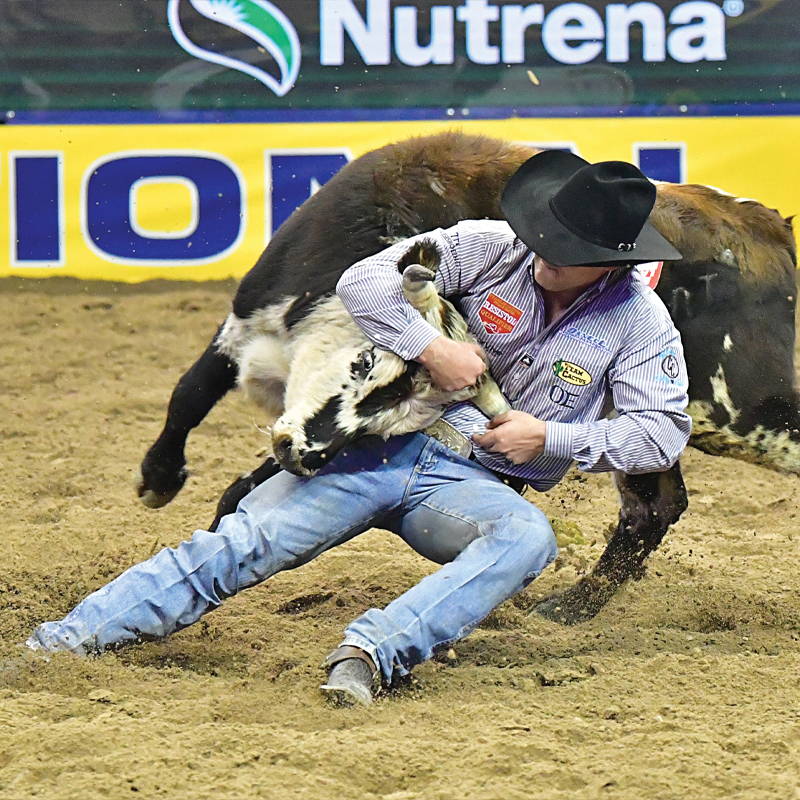 A knee injury in 2018 is the only thing that’s kept Dakota Eldridge from making 10 straight qualifications to the National Finals Rodeo. He still finished 24th that year.

He was coming off his second NFR average title and had big hopes, but the set-back didn’t deter him from being one of the best steer wrestlers in the game. He’s back, sitting eighth in the world standings with $104,098, with assists coming from victories throughout the season. Edridge’s biggest victory came in April, when he placed in all three rounds to win the average at San Angelo, Texas.

But Eldridge is more than a bulldogger. He’s an all-around talent who showcased his abilities for several years at the Timed Event Championship, a unique event that features 20 contestants competing in all five timed events.

As his average titles prove, Eldridge is comfortable inside the Thomas & Mack. He has finished among the top 10 in the world standings seven times in his eight NFR appearances. 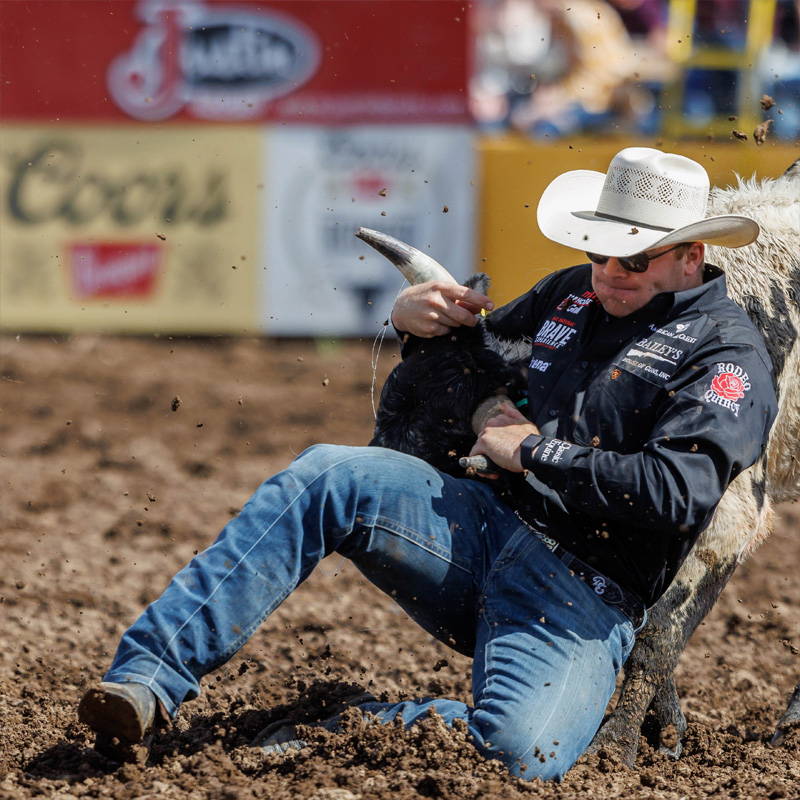 There was a time Jesse Brown thought about winning performances inside an NFL stadium. He thought it would come in football; he did, after all, play the sport at the Division I level.

He finally achieved that this past March when he won The American steer wrestling title at AT&T Stadium in Arlington, Texas, home of the Dallas Cowboys. Instead of wearing a star on his helmet, Brown lives the life of a rodeo cowboy.

He finished the 2022 regular season with $91,713 and enters his third straight National Finals Rodeo 11th in the world standings. He was named the 2017 Steer Wrestling Resistol Rookie of the Year, and since then, he’s proven why that campaign was just the launching pad for great things to come.

When he gets to Las Vegas, he’ll join others in riding Tyson, the bulldogging Horse of the Year owned by Canadian Curtis Cassidy. That type of horsepower will likely be a key to his success. 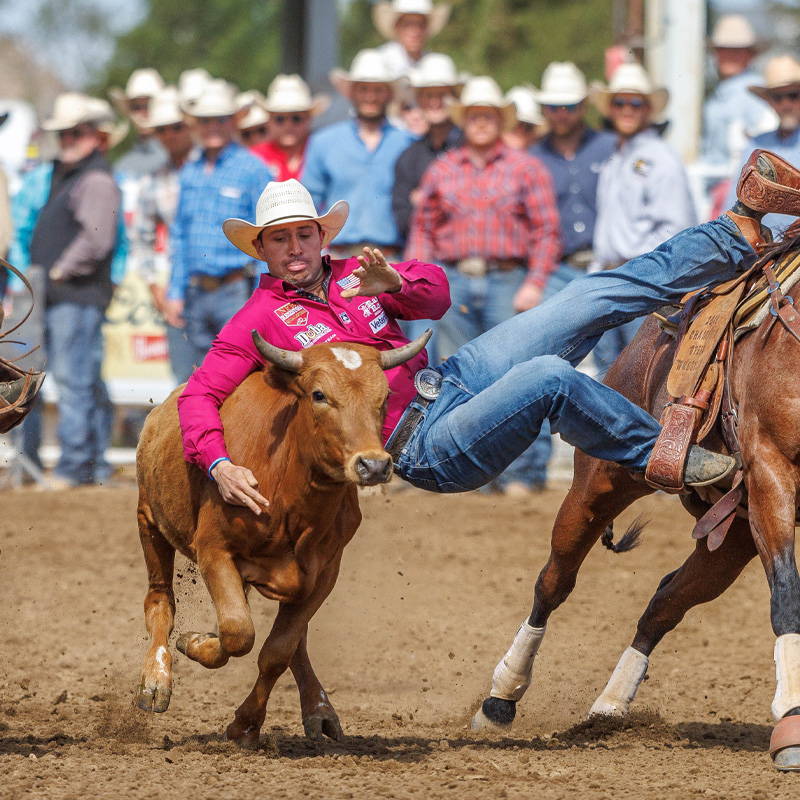