After Breaking a Leg, Resistol Champ Shows His Fortitude with NFR Bid

Nobody in rodeo expected Resistol header Clay Smith to be in position to win another world championship this year.

When a barrier incident in Prescott, Arizona, resulted in him breaking both bones in his lower right leg during the Fourth of July run, it looked as though his remaining three months of ProRodeo’s regular season would be lost. It was a nasty break for the two-time heading world champ, who won his Montana Silversmiths gold buckles in 2018 and 2019.

What he was doing in relative secret was planning his return. He made it the first week of August, and only a handful of people knew.

“He kept saying it; he kept professing it, ‘I’m going to be back,’ ” said Jake Long, an 11-time National Finals Rodeo qualifier and Smith’s heeling partner. “I don’t think anybody believe it but maybe him. It’s a miracle he’s here.”

Yes, it is. He wasn’t only back in action, he was excelling at a great rate. At the time of his return, Smith had fallen to 30th in the heading world standings. He heads to his eighth NFR 13th on the money list with $88,852.

So, how did he make a miraculous return to rodeo? It could be divine intervention or it could be with the help of friends. Within days of limping home to recover, a neighbor showed up with a big, metal stirrup. It was applied to a saddle, which was fixed to the way it needed so he could ride without putting too much pressure on his broken limb.

He actually wore a walking boot on his right leg, and the stirrup was big enough to outfit everything he needed. Another friend served as Smith’s assistant, doing everything on the ground and helping the cowboy mount his horse in order to make the runs necessary.

A few weeks after being injured, he started his roller-coaster ride back to ProRodeo. His first practice session was mediocre. He caught half the steers he tried, but he began to realize something: He could actually deal with whatever pain he had while roping. He went three for three at his next practice session, so he and Long made their plans to reunite in Kansas.

The first stop was in Abilene, and they stopped the clock in 4.9 seconds to finish second. That was worth $2,100. A little later, they were in Dodge City, where they again made a 4.9-second run to place in the first round. They were 6.1 in the second round and held the two-run aggregate lead heading into the championship round.

Roping last, they put together a round-winning 6.0-second run to claim the Roundup title, pocketing nearly $10,200 at two rodeos. They just kept climbing their way in the standings through the final two months of the regular season.

“I give the glory to God,” Smith said in August. “He’s the one who was able to get me through this whole deal. It’s unbelievable what He’s done with me.

“Then my partner’s been mistake-free and has heeled so good. For him to even be ready for me not really knowing what to expect, he’s done an amazing job for me.”

They’ve done amazing together, and they’ll be in position to rope for gold buckles in Las Vegas. Smith is one of nine Resistol headers in the mix at this year’s NFR.

Two seasons ago, Tanner Tomlinson was just cutting his teeth in ProRodeo.

He did pretty well then, walking away with the Heading Resistol Rookie of the Year title. Now 22 years old, Tomlinson is in the middle of a world-title race as he heads to his first National Finals Rodeo.

He finished the regular season with $107,368, good enough for fifth in the world standings. Last year, he finished 30th in the world; he was 32nd in his inaugural campaign. This year, though, he teamed up with one of the most established veterans in the game.

Patrick Smith is a two-time world champion heeler. He’s also twice as old as his header. The two have meshed together well.

“It’s a true blessing,” Tomlinson said about his partnership with Smith. “I believe the good Lord put us together for a reason, and I think it’s showing. I’ve learned so much from this guy, and I’m blessed to be around him and be part of it.” 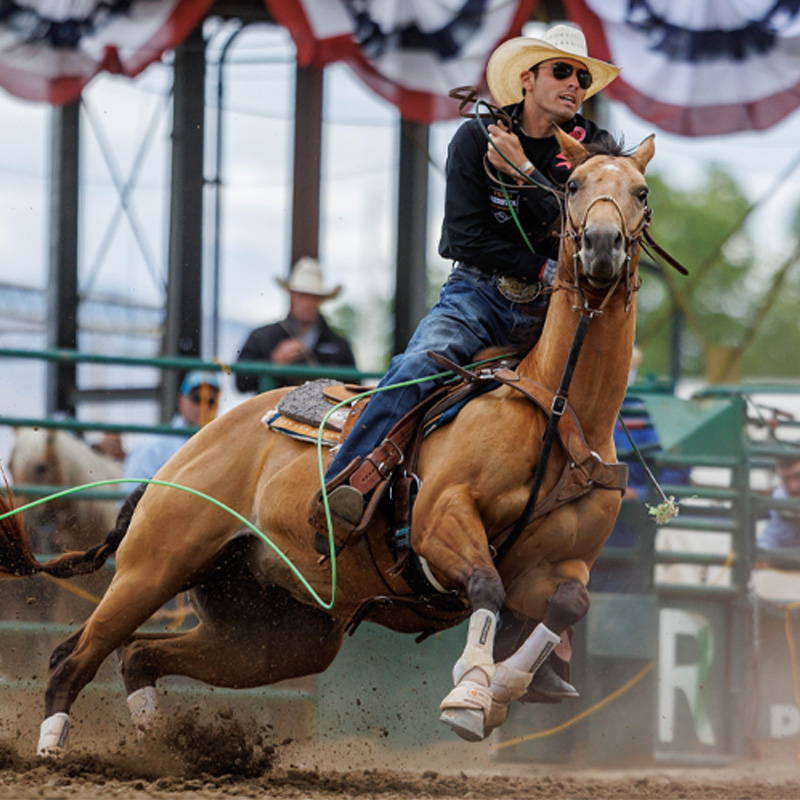 Dustin Egusquiza knows what it means to feel the pressure that comes during a battle for the world championship.

He’s experienced it at the National Finals Rodeo, and he will return to the grand finale for the fifth time in his career this year after finishing the regular season sixth in the world standings. He has collected $102,022 through the regular season while competing with fellow Resistol cowboy Travis Graves.

A year ago, Egusquiza finished third in the world standings. He was seventh in 2020 and finished 18th in the two years prior to that, one year roping with Graves and the other with another veteran, Kory Koontz. It’s just further proof of the Florida cowboy’s abilities at every level.

He started his career roping with another Southeastern legend, Georgian Brad Culpepper, and they ended the 2016 campaign with Egusquiza being named that year’s Heading Resistol Rookie of the Year. 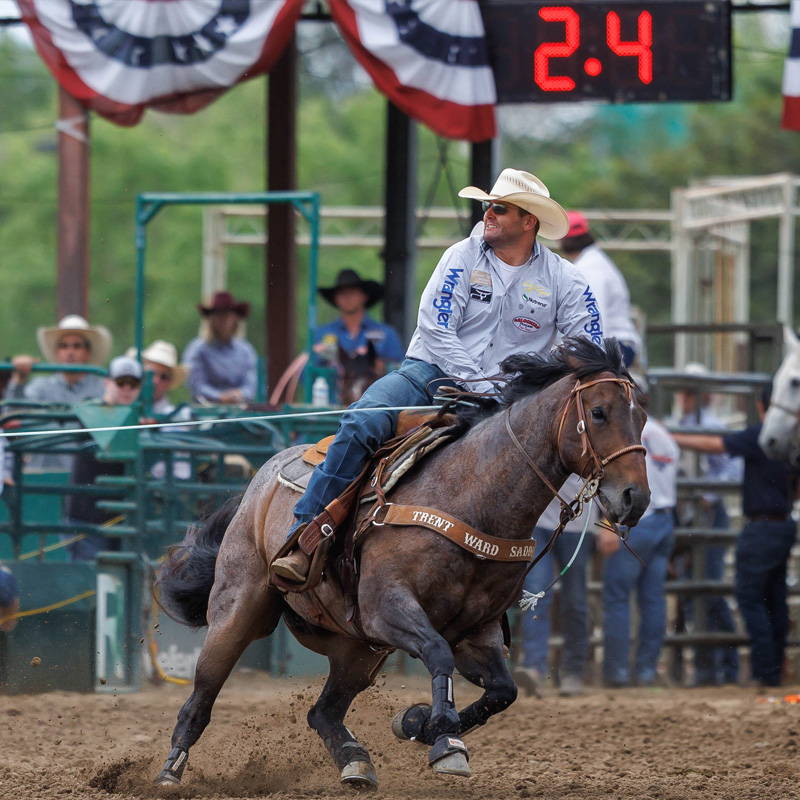 With his family history in rodeo, Tyler Wade takes a different approach to preparing for ProRodeo’s grand finale.

While some guys practice daily, others make sure they have outfitted their rehearsal arena similarly to the dimensions of what they’ll see in Las Vegas during the 10 days of the National Finals Rodeo. Wade, the 2012 Heading Resistol Rookie of the Year, is producing jackpots.

You see, his father, Jerry, is a stock contractor for high school rodeos, so Tyler is just carrying a family tradition in a way that puts him in the heat of competition as he gets ready for the NFR. This is his fifth qualification, and he will arrive in Sin City eighth in the world standings after having earned $98,573 through the regular season.

Roping with Trey Yates, the tandem secured wins throughout the season, including in the west Texas towns of Odessa and Pecos. If that didn’t prepare him for the rigors of the NFR, he has other ways to do it. 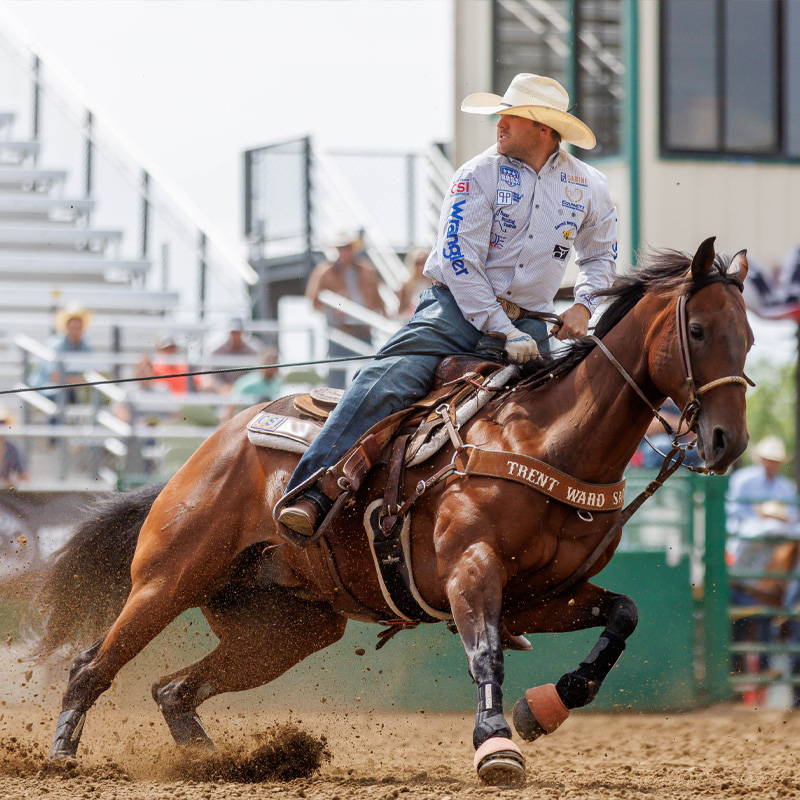 Named after his father, Elvenee, he’s gone by Jr. Dees most of his life. He was raised around roping, and this year, while teaming with Levi Lord, Dees pocketed $96,045 and will go to his second National Finals Rodeo as the ninth-ranked header in the mix.

He and Lord won Caldwell, and that was a big plus. Another key, though, was catching checks along the way, including a share of the title at Clovis, California.

Over his career, Dees has finished among the top 30 in the world standings six times in seven years. His best finish was 11th in 2017, his first year to qualify for the NFR. That year, he and Tyler McKnight won the title in Salt Lake City to secure their bids for Las Vegas.

He’s already among the top 10 this season, and a good showing over the 10 December nights of ProRodeo’s grand finale will go a long way toward him having his best year ever. 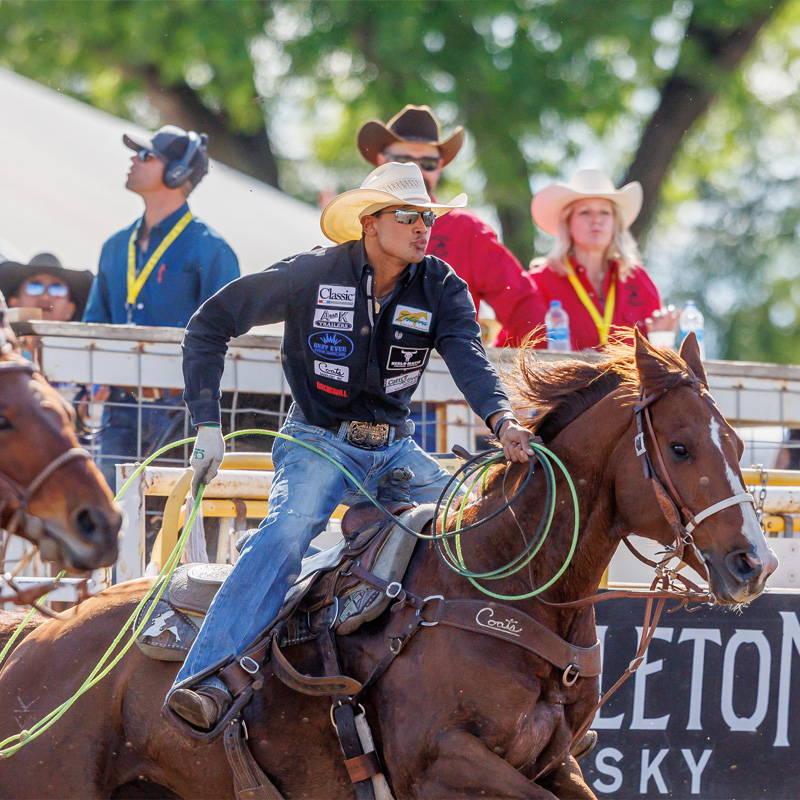 When Cody Snow burst onto the ProRodeo scene seven seasons ago, he partnered with veteran Dugan Kelly, and the lessons he received proved beneficial: Snow finished 20th in the standings and was named the 2015 Heading Resistol Rookie of the Year.

In 2016, Snow made the first of seven straight trips to the National Finals Rodeo while roping with Kelly. A year later, he teamed with Wesley Thorp, and the two began making magic together. In 2019, they earned the NFR average championship; Snow was the reserve world champion in heading, while Thorp claimed the heeling gold.

They’re still showing their talent and resilience together.

“We’ve run a lot of steers together,” said Snow, who earned $91,843 and enters the NFR 10th on the money list. “We’ve been roping together for five years and know each other pretty well.”

They do, which is why they’ve connected on six straight NFRs together. 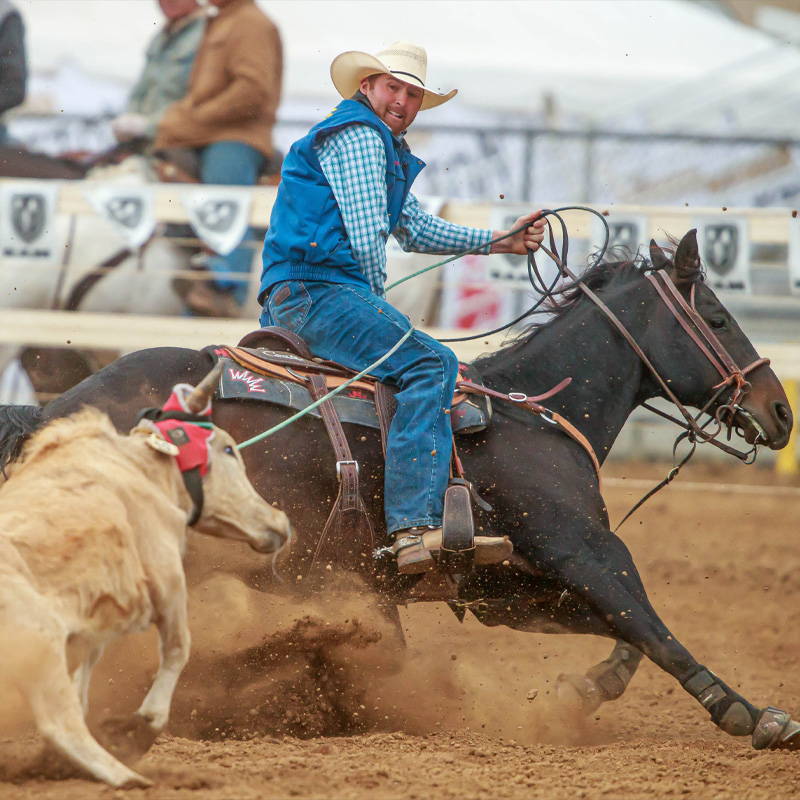 Lightning Aguilera goes by a nickname, but he proves its value every time he competes.

He comes from a proud Latino family; his grandfather, Lao, competed in several rodeo events in Cuba, but team roping is what the family does. Lao Aguilera is a header, as is his son and Lightning’s father, Tico. The youngest of the three was horseback long before he can ever remember.

But Lightning is the first in his family to compete in ProRodeo as a team roper. He’s managed some amazing things, especially considering that an accident he had when he was 3 left him without a right foot. He wears a prosthetic that allows him to do everything in the saddle he wants.

After finishing 39th in the world standings a season ago, Aguilera has shot up the charts. He enters his first NFR 11th in the world after earning $90,421, a big portion of which came with his victory in San Antonio with Jonathan Torres. 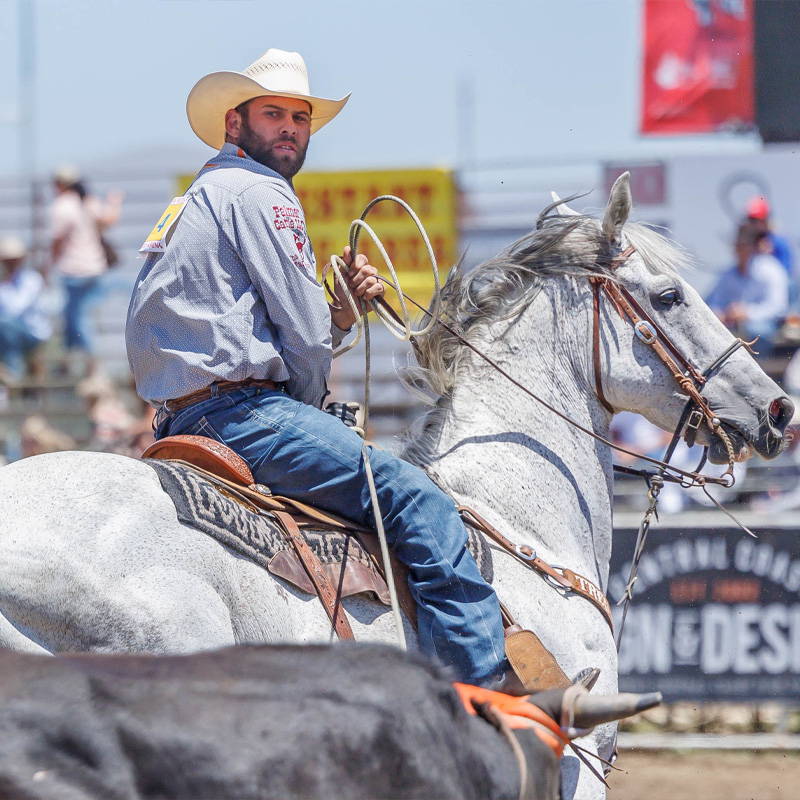 Riley Minor had to be a bit frustrated. He’d finished the 2021 regular season ranked 16th in the heading world standings, just missing the mark to advance to the National Finals Rodeo.

His brother and primary roping partner, Brady, had secured his bid to return to Sin City, so Riley Minor was stuck in the stands watching the action. He didn’t let his frustrations last long, though. He and world champion heeler Cory Petska went to work while in Las Vegas, winning the open roping at the World Series of Team Roping. That was worth $77,000.

He returns to his rightful place among the top 15, finishing the 2022 regular season 12th in the standings with $89,022. He comes from an established rodeo family, one in which has been inducted into the Ellensburg Rodeo Hall of Fame.

It’s that kind of legacy and talent that keeps him as one of the elite ropers in the game today and why he is always a contender for the Montana Silversmiths gold buckle. 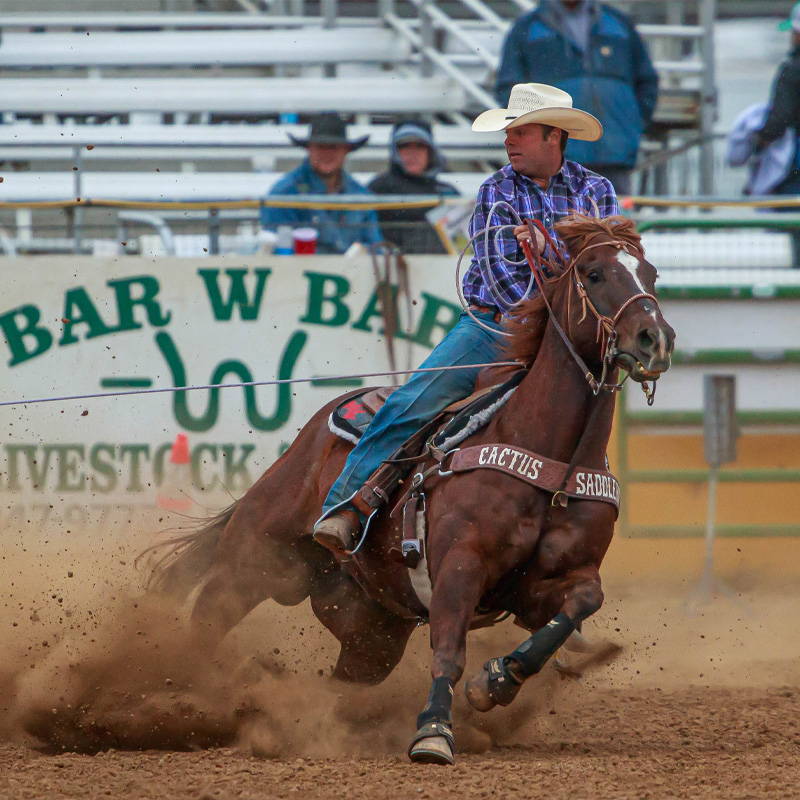 It came down to the final few runs of the 2022 regular season, but Jake Orman roped his way to his first National Finals Rodeo qualification.

Orman spent the year roping with Oklahoman Brye Crites, who also is going to his first finale. Orman snuck in to the 15th spot in the heading money list with $85,067. He finished just $1,000 ahead of the No. 16 cowboy, Cory Kidd.

Orman and Crites got some key victories over the campaign, kicking off their summer run by winning in North Platte, Nebraska. They also had some key victories to jump-start their July run: Livingston, Montana; Killdeer, North Dakota; and Hamel, Minnesota.

Most importantly, Orman proved this season the promise he’s shown the previous two campaigns, where he finished 22nd in 2020 and 24th a year ago. Now, he’ll rope for the big bucks in Las Vegas. 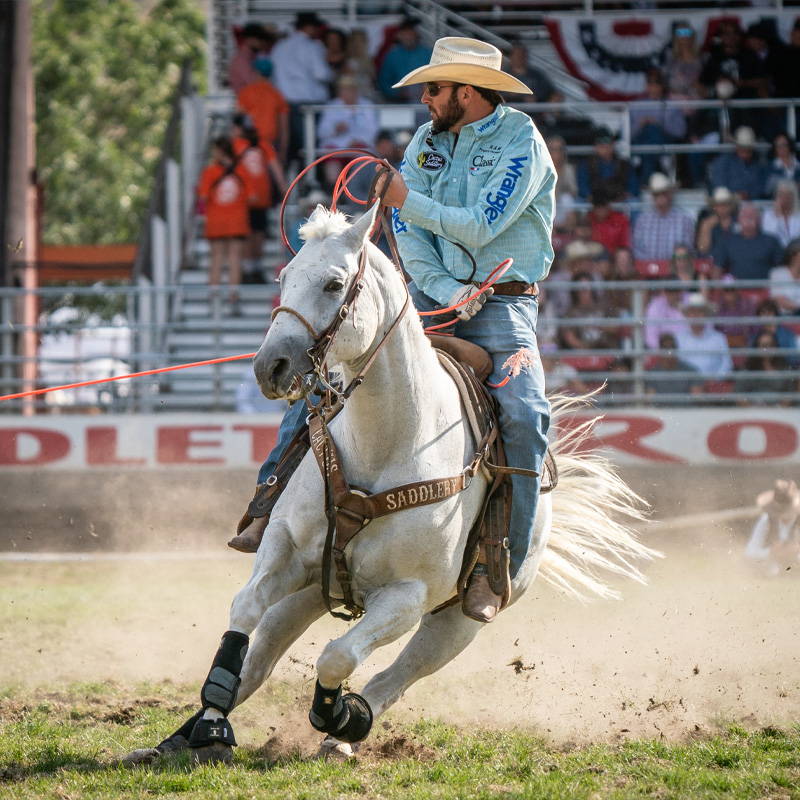