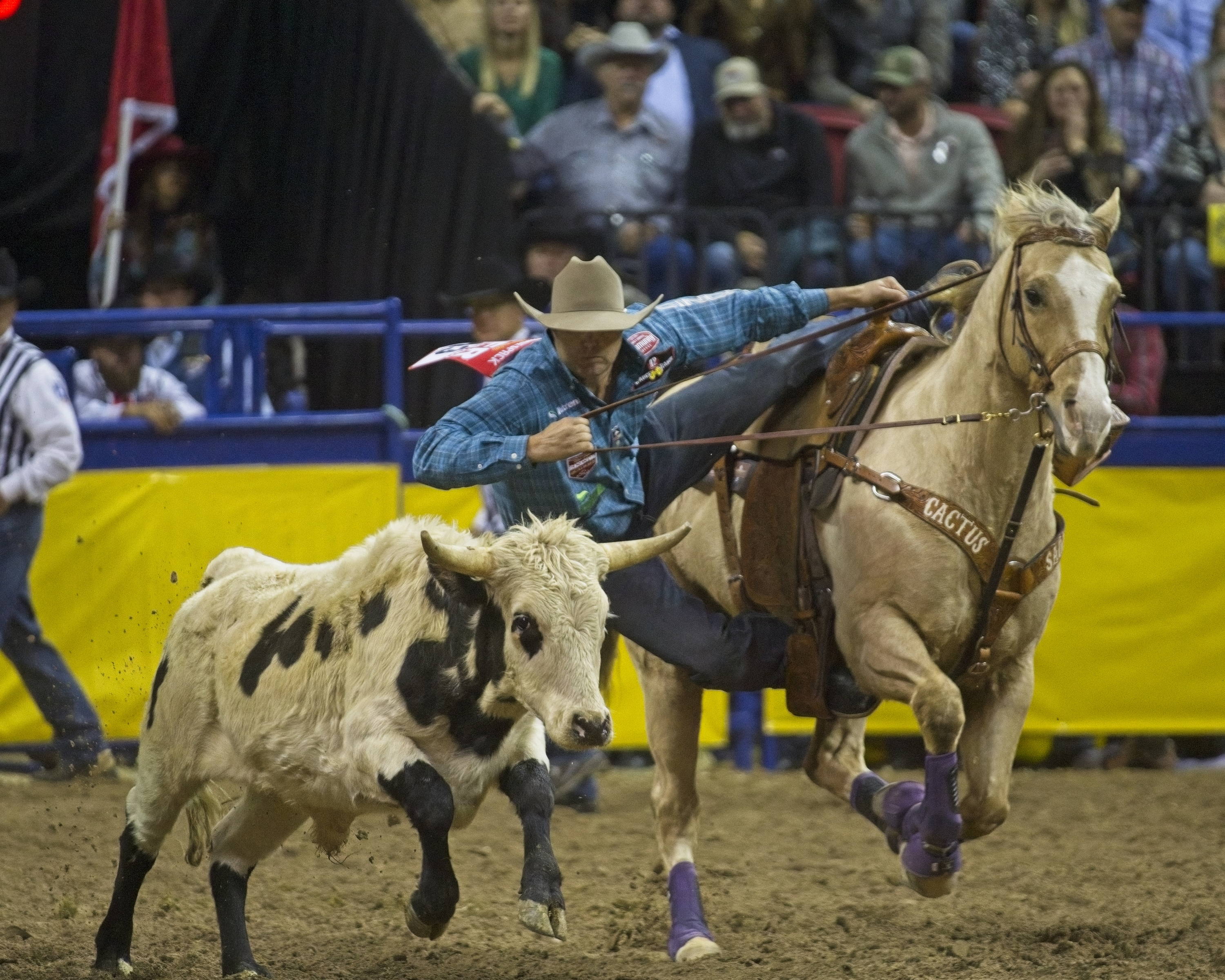 LAS VEGAS – He stood there in a bit of shock. He was still processing the things that had just happened minutes before.

There was a bit of sadness creeping into his eyes. It was a strange emotion coming from the newly crowned and four-time world champion steer wrestler.

“Whenever that happened to Will (Lummus), I still feel bad about that,” said Tyler Waguespack, 32, a Resistol cowboy from Gonzales, Louisiana. “Me winning my fourth gold buckle has not sunk in yet. My buddy’s supposed to be wearing this buckle.”

The 2022 bulldogging championship was in Lummus’ hands prior to the 10th round of the National Finals Rodeo. He had done everything to win his first world title. He just needed a clean run on the final night of the season to snag it. He’d drawn a steer that Waguespack had in the seventh round, and Wags had broken the barrier and suffered a 10-second penalty

It was not the steer to draw, but Lummus had it. The same fate met him. The broken barrier meant his dreams were dashed. The last man to run, Idahoan Stetson Jorgensen, was the next man in line to take the Montana Silversmiths gold buckle, but his steer escaped his grasp, and so did the buckle.

“I’m thankful to come out on top at the end of the week, but I feel terrible about the unfortunate event of breaking the barrier,” Waguespack said. “Then Stetson Jorgensen missing that steer … it all fell into place for me to win; God was on my side today, but I feel like them guys should be up here instead of me.”

That feeling may not go away anytime soon. Bulldoggers are a close-knit group, especially Waguespack and Lummus. They’re both from the Deep South and both are endorsed by Resistol, and they’ve been friends for years. In a few weeks, though, that buckle will arrive at his home, and Waguespack’s name will be etched on that gold. He’ll realize it all then.

“I had a rough week when I first started out,” he said, noting that he was drawing on the bottom end of the steers. “I wasn’t really placing high up. I made a horse change. Rowdy and Remey Parrott have done tremendous for me. Them two boys have been like brothers to me, and Rowdy welcomed me with open arms to get on DC.”

That was the move he needed to make. Things just weren’t clicking with Casper, his horse that guided him to the 2021 world title and led him back to the NFR for the eighth straight year. It was a difficult choice to jump off his horse and on to DC, a mount he’d never tried in competition, but it was the perfect business decision.

“I was able to place on three of the last four rounds I rode him,” Waguespack said. “I got a go-round win with him (on Night 8). Them two boys came in clutch, and I can’t wait to celebrate with them two guys, because they’re just as deserving of the hard work of getting this buckle as I am.”

In all, he placed in six go-rounds and earned $145,000 in 10 nights in Las Vegas. Even with a broken barrier, Waguespack finished third in the aggregate race. All that cash helped ease him onto the bulldogging mountaintop. He ended the year with $268,881, less than $2,700 ahead of Lummus.

It’s all thanks to DC.

“I practiced on him, but that was it,” Waguespack said. “I ran three steers on him in the practice pen at Rowdy’s house because I thought that horse was working really well. I really trust Remey Parrott on the hazing side. That young man does a good job, and I knew if anything happened with me on Casper, I would be able to jump on him and feel good about it.

“I’ve run four steers on him behind the barrier and got a gold buckle with him.”

Wags first won gold in 2016, then added more titles in 2018 and ’21. There are only a handful of cowboys who have won as many or more steer wrestling world titles. Homer Pettigrew has the most with six, followed by Luke Branquinho’s five. Wageuspack joins Jim Bynum, Everett Bowman and Ote Berry with four.

“This is so awesome,” Wageuspack said. “I grew up watching all my heroes and dreaming about having one gold buckle. Ote Berry is one of my biggest role models and biggest supporters and helped me out so much.”

The list of great world champions is relatively small, but the Louisiana cowboy understands that there may be more following his path very soon. Besides being comrades in arms and the other bulldoggers’ biggest cheer leaders, they know anyone can win the bulldogging gold year in and year out.

“In a lot of (the) events, there’s an elite group at the top in all the events,” he said. “In the steer wrestling, the top 50 guys have just as good an opportunity to win as I do. There’s so much talent coming up in the steer wrestling nowadays, young men coming up, guys in college that can come in there and kick your butt right now.

“We know the guys to watch every year. They’re going to be the ones at the top, but in steer wrestling, there’s no telling what we’re going to have coming into the finals. It’s whoever gets on the heaters and rides them out.”

Waguespack got on his heater the end of this year’s NFR, and he rode DC to close out a season that included rodeo’s gold for a fourth time. 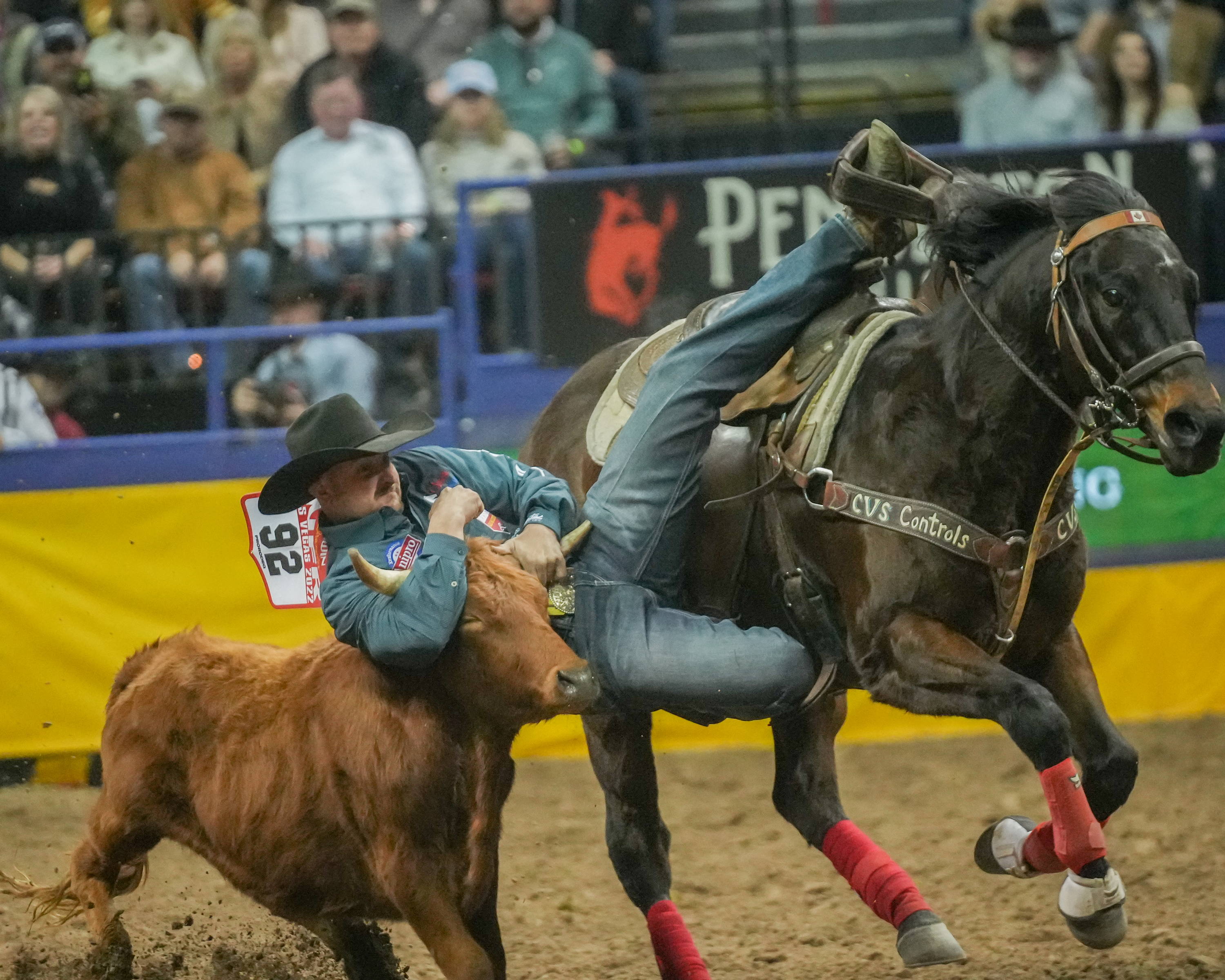 He first qualified for the NFR in eight years ago, the same season he won the national title at the RAM National Circuit Finals Rodeo. He added another national championship at this year’s NFR Open, the new name for the circuit-system’s main event.

Over the first 10 days in December at Las Vegas, he wrestled steers better than the others and walked away with the NFR average title. Next up on the list? That Montana Silversmiths gold buckle.

“I’m going to prove the system does work, and you can make the NFR if you’re just a broke nobody.”

He’s been somebody since he came on the scene a dozen years ago, and he proved it. He made 10 runs in a cumulative time of 46.10 seconds, two seconds faster than the runner-up, Jesse Brown, who also rode Tyson, the horse of the year owned by Canadian Curtis Cassidy. By the time the accountants were done, Irwin had earned $151,537, with half coming from his first-place check in the average.

“That dang sure lifted this country boy’s spirits,” he said.

He finished the year with nearly $250,000, good enough for third in the final world standings. Most importantly, he’ll forever be known as an NFR average champion.

“It was a lot of fun, but a lot of work went into it,” Irwin said. “I practiced every day for it. I’m grateful for my Lord and the other 14 guys that were there. I’m grateful for Tyson and Curtis. That horse is so consistent that I just focused on catching the horns and throwing them.”

He did that better than everyone in Las Vegas.